This precious early 19th century Orthodox cross tells the story of the Crucifixion with panels of the Blessed Virgin, St. Mary Magdalen, St. John and St. Longinus the Soldier on either side.  God the Father is shown above, with Jerusalem in the background and the lance and sponge by the Crucified Christ.  The sun and moon are depicted and the inscription reads:  "Lord, we bow before thy cross and we glorify thy resurrection."

Based on an original Russian antique, c. 1780, which shows the crucified Christ, flanked by the sun and moon with the inscription in Slavonic, "Jesus, O Master, I bow down to you." Above Christ is a rooster (the rooster that crowed three times according to Christ's prophecy to Peter) and above that a depiction of God holding the world surmounted with a Byzantine cross with cherubim and seraphim on either side. There is a faint imprint of "A" and "O", Alpha and Omega as well.  On either side of Christ is the lance and the sponge associated with the Crucifixion, and a "K" and "T", meaning Kappa and Tau, beginning and end.  Below Christ is the city of Jerusalem, a thorn bush from which came the crown of thorns and a skull symbolizing Golgotha, the Place of Skulls, on which Jesus was crucified. 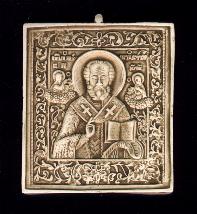 Of Russian origin, c. 1830, this icon depicts St. Nicholas flanked by the Madonna and Christ.  St. Nicholas, beloved of the Orthodox Church, is also the patron saint of children and sailors.  The tale which connects St. Nicholas to children has him coming anonymously to the home of a poor man to throw bags of gold over a wall to save the man's three little girls from poverty and potential prostitution.  This tale later metamorphasizes into the more familiar Santa Claus who throws presents down the chimney in the secrecy of night.  He is the patron saint of sailors for his role in saving a sinking ship which was transporting him to Myra where he became bishop. 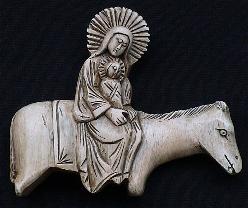 This Italian Renaissance wood carving depicts Mary with the infant Jesus in their legendary escape from Herod's Massacre of the Innocents.   The original shows traces of paint and gilding. 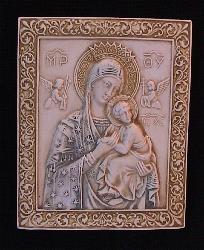 This antique Russian icon shows our Lady of Perpetual Help, as she tenderly comforts the infant Jesus who has just realized he is destined to be the Savior of the world through his crucifixion.   In the Orthodox tradition, each icon has a unique and complex story to tell, for those who are familiar with the symbolism.   Our Lady of Perpetual Help, also familiar to those in the Roman Catholic faith, is a revered image, showing the Mother of God to be both strong and compassionate.  Her gaze faces the viewer, reminding them of the sacrifice her Son is to make for each of us.   The little Jesus has just seen two angels holding the instruments of his Crucifixion and has run so fast into the arms of his mother that his sandal has fallen off.  Until this heavenly visitation, Mary has kept the knowledge of this burden from him, in her great love for him.

This antique carving is a pictorial representation of the beloved 23rd Psalm, where Christ has led his flock to the idyllic place where there is no want or fear, as described in Scripture.   The original carving is personally inscribed on the back by Ignatius Esser, abbot of St. Meinrad's Abbey, to a Benedictine nun on the occasion of her oblation.